The poet, artist, journalist, photographer, writer, musician and editor Bengt O Björklund was born in Stockholm 1949. In 1968 he landed in jail in Istanbul for $ 20 worth of hash and met a bunch of international artists, poets and musicians. It was then he embarked on his artistic voyage in many directions as well as learning to cook, do yoga and generally get a life.

The source of his inspiration in Turkey those early years were his Japanese friend, the artist Koji Morrishita and the Italian artist, poet, and Dadaist Antonio Rasile.
The character Erich in the movie Midnight Express is based on Bengt.
Bengt has published 10 books of poetry, five are written in English, five in Swedish.

Bengt was recently awarded Sweden Beat Poet Laurette by the National Beat Poetry Foundation Inc. and received his honour in Connecticut on September 1 2018.

For 50 years Bengt has written poetry both in his mother tongue Swedish and in English. So why this half a century long love for writing poetry in English? It all started, he says, because no one spoke Swedish in the jails of Istanbul where he spent his formative years between 1968 and 1973.

–"I was drawn into a linguistic field of a language so much richer than my own, with a sound that pleased me constantly. That is where I still am today. I’m still amazed of all that I can say, formulate and sound even in English. I can sing!"

Bengt’s artistic journey also started in Istanbul with coloured pencils and watercolours. He had his first exhibition at Joe Banks gallery in Copenhagen 1975. Since then he has exhibited his art in many places.


At the beginning all of Bengt’s art was all about a new mythology and giving birth to light. The decades have seen more playfulness and a joy in letting the colours and various liquids have a say in the process. And the birch became his totem. 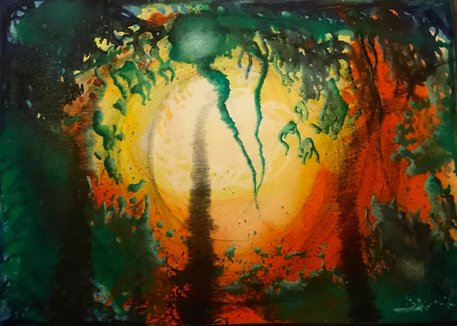